If you are reading this, perhaps it is because you are (or someone you know is) having problems with anxiety. Anxiety problems may take several forms, the diagnostic categories include generalised anxiety, panic, post-traumatic stress, obsessive-compulsive problems or phobias. People suffering with anxiety often also have depression at the same time. It can be a heavy burden to carry, causing a lot of suffering.

Anxiety and depression problems can be helped by counselling and psychotherapy.

Dr Tony Weston’s BACP award winning research showed how clients improved through counselling in terms of their anxiety, depression and general distress caused by a number of problems such as abuse, addiction, anger, bereavement and relationship difficulties. Dr Weston’s private practice is located 11.5 miles south of Addenbrookes NHS Hospital, just off the A1307 (and on the 13 bus route) in the South Cambridgeshire village of Horseheath. He enjoys working with individuals, couples and family groups (e.g. parent and child).

Contact him now on 01223-894896 (phone is answered by a receptionist 24/7) or email him at tony.weston5@btinternet.com to make an initial appointment.

The rest of this page gives you some more information about anxiety problems and outcomes experienced by clients working with Dr Tony Weston. Dr Weston was pleased to accept the British Association for Counselling and Psychotherapy (BACP) 2011 award for Outstanding Research Project from Ruby Wax. This was for his research on effective therapy for depression, anxiety and distress e.g. following bereavement, relationship problems, addiction, abuse etc. Participants included 321 clients – including 137 of Dr Weston’s own clients – and 27 fellow therapists.

‘Anxiety’ is a broad term covering several conditions, including¹:

2. Panic Disorder, including panic attacks (sudden onset of intense feelings of terror, together with fear of dying, losing control, having a heart attack or stroke, ‘going crazy’ or experiencing huge embarrasment), During their lifetime 1.0-3.5% of people willl meet the diagnostic criteria during their lifetime and during any one year 0.5-1.5% of people will have this.

3. Post-Traumatic Stress Disorder (PTSD, re-experiencing a traumatic event and reminders of the event are avoided and or lead to upset). During their lifetime 8% of people will meet the diagnostic criteria and amongst ‘at risk’ groups this can be 33-50+% of people e.g. survivors of rape, military combat and captivity, and ethnically or politically motivated internment and genocide.

5. Obsessive-Compulsive Disorder (OCD, obsessions which cause distress and or compulsions which are attempts to reduce the distress). During their lifetime 2.5% of people will have this and at any one time 0.5-2.1% of people will meet the criteria for this.

6. Phobias e.g. Agoraphobia (fear of places or situations from which escape might be difficult or embarrasing), Social Phobia (fear of exposure to certain types of social or performance situations) and objects or situations that cause fear (which others might see as unreasonable or excessive) such as Animals (dogs, cats, snakes, spiders etc.), Environments (heights, water, storms, etc.), Blood-infection-injury (seeing blood, injury, injection or other invasive medical procedure), Situations (public transport, tunnels, bridges, lifts, flying, driving, enclosed places, etc.) and Other Phobias (fear of choking, vomitting, contracting an illness, etc.). During their lifetime 3-13% of people suffer with social phobia and other specific phobias affect 7.2-11.3% of people during their lifetime, and 4-8.8% of people at any one time meet the criteria for a specific phobia.

NOTE: The information provided on this website is for general information only and not intended as a substitute for diagnosis or treatment; if you are concerned about your health please contact an appropriate practitioner.

The following graph shows outcomes for clients presenting at this counselling service with symptoms of anxiety measured using the Beck Anxiety Inventory, (BAI²). The BAI measures symptoms associated with anxiety disorders, particularly panic and generalised anxiety disorders. As at July 2021 there were 180 clients who had started with some level of clinical anxiety and who had a subsequent measurement of their anxiety. Average scores are illustrated in the graph below, where the average start score was equivalent to a moderate/severe level of anxiety and the average subsequent score was equivalent to being not clinically anxious.

Average client age was around forty years old and ages ranged between teens and eighties. Just over half of these clients were female, around a quarter were single/three-quarters were in relationships and around two-thirds were themselves parents.

Clinical trials typically exclude clients who have more than one presenting problem e.g. include clients who only have anxiety. This practice-based research included clients who are usually excluded from clinical trials and included clients who were at risk to themselves and/or others, and/or were also suffering with depression and other problems, and/or had a so-called ‘personality disorder’ and/or had problems with addiction (e.g. drink, drugs, gambling, pornography, etc.), in addition to their anxiety.

Severe Anxiety is defined using the Beck Anxiety Inventory (BAI) as those clients scoring 26 or greater on a scale with a maximum score of 63. Outcomes for 52 clients presenting with symptoms of severe anxiety to July 2021 are shown in the following graph:

For clients presenting with severe anxiety, average age was around forty years old, range teens to eighties, over half were female, over three-quarters were in relationships and the majority were themselves were parents. The average number of sessions was around eleven, range two to thirty-four sessions.

Outcomes for 84 clients seen at this service with symptoms of panic to July 2021 are shown in the following graph. Symptoms of panic included heart pounding or racing, feelings of choking, fear of dying and or difficulty breathing. 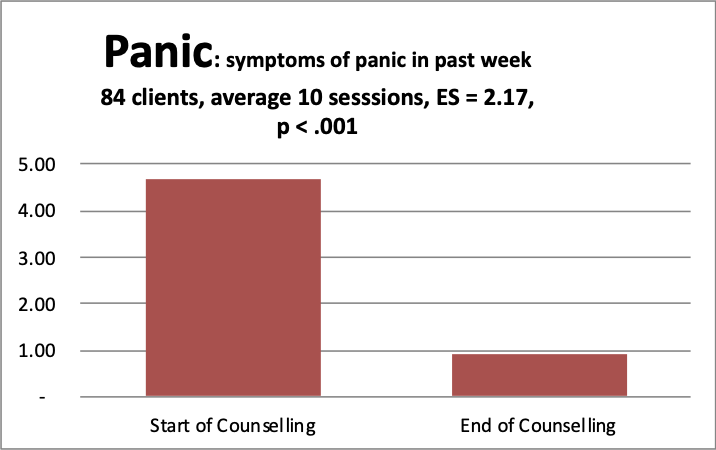 As at July 2021 there were 84 clients who, at the start of counselling, had scored 3 or greater on the BAI panic subscale out of a maximum of 12. This represents an average change from symptoms of panic in the past week being ‘very unpleasant’ and or ‘I could barely stand it’ to by the end of counselling ‘no symptoms at all’ or ‘it did not bother me much’. These clients had an average age around forty years old, age range teens to eighties, just over half were female. Clients had on average ten sessions, range 2 to 34 sessions.

Following is a graph of average changes in symptoms of trauma experienced by 197 clients at this service to July 2021:

Using the CORE-OM (clinical outcomes routine evaluation – outcome measure) trauma subscale for 197 clients scoring at least 4 out of a maximum possible score of 8 on the trauma sub-scale, meaning clients were distressed and or disturbed by unwanted thoughts, feelings, images or memories ‘sometimes’, ‘often’ and or ‘most or all of the time’. Average client age was around forty years of age, age range teens to eighties, over half were female and over half were themselves parents. Average number of sessions was seven (range 2 to 37 sessions).

Following is a graph for average changes experienced at this counselling service by 149 clients to July 2021 who were struggling to function in social relationships (e.g. talking to people felt too much, feeling humiliated, shamed or criticised by other people):

Clients scored 9 or more out of a maximum 16 on the Problems with Social Relationships scale of CORE-OM at the start of counselling. Average client age was around forty years of age, range teens to eighties. The average number of sessions was seven, range 2 – 37 sessions.

Blushing when with other people

Following is a graph for average changes experienced at this counselling service by 34 clients who had problems with blushing (face flushing), to July 2021: 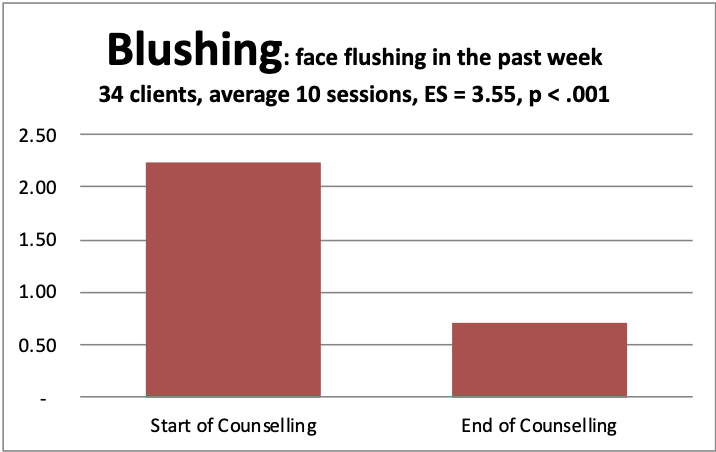 These were clients who had experienced blushing in the past week to a moderate level (‘it was very unpleasant but I could stand it’) or a severe level (‘I could barely stand it’). By the end of counselling on average they described themselves as having experienced blushing in the past week to a mild level (‘it did not bother me much’ or not at all. Average client age was around forty years of age, age range late teens to sixties, around three-quarters were female and over three-quarters were in relationships and/or had a child(ren). The average number of counselling sessions was eleven, range 3 – 34 sessions.

Clinical trials typically exclude clients who have more than one presenting problem e.g. include clients who only have anxiety. This practice-based research included clients who are usually excluded from clinical trials and included clients who were at risk to themselves and/or others, and/or were also suffering with depression and other problems, and/or had a so-called ‘personality disorder’ and/or had problems with addiction (e.g. drink, drugs, gambling, pornography, etc.), in addition to their anxiety.

This naturalistic research showed on average a large improvement for a wide range of anxiety problems, including generalised and severe anxiety, panic, trauma, difficulties with social relationships and blushing when with others, even if there were other co-occuring symptoms.

Please note past performance is no guide to the future and there are no guarantees about outcome in therapy.

You can contact Dr Tony Weston on 01223-894896 (phone is answered by a receptionist 24/7) or email him at tony.weston5@btinternet.com to make an initial appointment.