Differentiation of Self refers to the extent to which a person can balance both (a) emotional and intellectual functioning as an individual, and (b) intimacy and autonomy in relationships with others. Highly differentiated people are thought to show good psychological adjustment. They can function well both as individuals and with others. Less differentiated people are considered more vulnerable to psychological and interpersonal difficulties. The process of therapy, and other personal development activities, can permit people to become more differentiated.

The more differentiated person can shift between experiencing powerful feelings and using calm rational reasoning, as situations require. They show wisdom, intelligence, and emotional intelligence. As an individual they can be flexible and cope well with stress. Within relationships they can be both intimate and independent; this is sometimes referred to as ‘interdependence’. The less differentiated person can be emotionally reactive. They sometimes make poor decisions based on ‘gut reactions’ (without thinking things through), or are unable to figure out what they are feeling in certain situations and thus unable to make use of bodily wisdom. They can find it hard to retain their sense of self when in relationships; they may give way too easily to others, or hold on rigidly to ‘prove’ independence.

There are two main aspects to the Differentiation of Self: (a) individual functioning, ‘thinking-feeling’ dimensions, and (b) interpersonal elements, on a ‘separateness-together’ dimension. Each of these two elements may be further subdivided into two parts, giving four dimensions in total:

Emotional Reactivity, is the extent to which a person can regulate their own emotions. Low scores here suggest problems with being overtaken by feelings (at the expense of rational thinking), and riding an ‘emotional rollercoaster’, perhaps leading to emotional and behavioural avoidance. Low scores are also indicative of individuals being overly sensitive to criticism/hurt from others, or being adversely affected by the feelings of another. High scores on this dimension indicate mastery of one’s own feelings, and the use of feelings as an important source of information to help guide behaviour (in conjunction with other information on context, goals, etc.).

Research at this service suggests improvements in emotional reactivity are possible through counselling. The following graph shows average changes in Differentiation of Self: Emotional Reactivity, experienced by 23 clients to July 2020 after an average of 18 sessions:

I-Position, is the extent to which a person can maintain their own independent identity and sense of self despite pressure from others. to think, feel or behave differently. Low scores on this dimension indicate difficulty with a sense of self. Individuals in this position may perceive one’s own independent identity being threatened by arguments with others, upset, stress, or a need for approval from others.

Research at this service suggests improvements in I-Position are possible through counselling. The following graph shows average changes in Differentiation of Self: I-Position experienced by 21 clients to July 2020 after an average of 20 sessions: 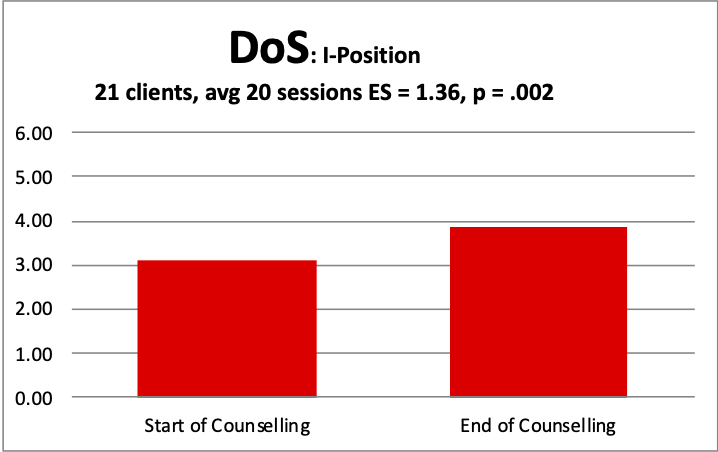 Emotional Cut-off, is the extent to which a person might seek to distance themselves from others in order to appear independent, or is comfortable expressing their own feelings with another (including feelings about the other), without any threat to their independence. Individuals with low scores on this dimension may feel emotionally inhibited by others, and have difficulty talking through emotional issues which have arisen with others. They may be concerned about losing independence in intimate relationships (feeling a need to ‘run away’), and feel that intimate others are too demanding. High scores here indicate ease with empathising and accepting feelings of others (without feeling diminished or threatened), and an ability to describe, express, and be one’s own feelings in relationships.

Research at this service suggests improvements in Emotional Cut-off are possible through counselling. The following graph shows average changes in Differentiation of Self: Emotional Cut-off experienced by 20 clients to July 2020 after an average of 15 sessions: 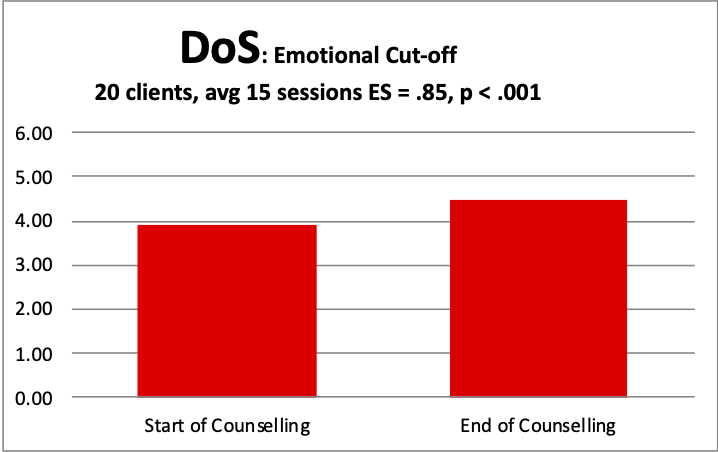 Fusion with Others, is the extent to which a person maintains thoughts and feelings consistent with important others to gain/maintain the acceptance and approval of others. Individuals with low scores on this dimension may feel a need for approval, or to appease others. They may be unduly affected by criticism of others, have difficulty making decisions without guidance from others, and feel physically sick at disagreements with important others. Those with high scores on this dimension are able to consult with others and consider their views. Though they may be influenced by others, they can still make their own decisions and judgements based upon what feels right to them.

Research at this service suggests improvements in Fusion with Others are possible through counselling. The following graph shows average changes in Differentiation of Self: Fusion with Others experienced by 20 clients to July 2020 after an average of 15 sessions:

People can become more differentiated through therapy, personal development and other activities, see below.

Individuals often develop a sensitivity to rejection from others through childhood experience (even in the uterus). Bowlby (1969) is credited with recognising that infants require a secure attachment with a caregiver. The absence of a secure attachment can give rise to fears about abandonment and rejection. There is some evidence that childhood emotional neglect may be key in the development of long-term rejection sensitivity (Bungert et al., 2015).

Becoming more differentiated and less vulnerable to rejection
Research suggests enhanced ‘executive control’ functioning (Ayduk et al., 2007) and improved self-esteem (Bungert et al., 2015) may help manage, control, and master the effects of rejection sensitivity on oneself and on relationships with others. This can make interpersonal relationships more fulfilling.

Executive control has been described as ‘the ability to override habitual, automatic reactions in favour of less dominant but situation appropriate responses in a voluntary and effortful manner’ (Ayduk et al., page 153) and is regulated by parts of the brain called the left prefrontal cortex and basal ganglia. Executive control (the ‘cool system’) may be used to regulate ‘hot’ reflexive emotions, arising in the limbic system, especially the amygdala.

Enhanced executive control can improve differentiation of self, especially emotional reactivity and emotional cut-off, and the emotional and cognitive aspects of rejection sensitivity. Beginning in the 1960s Walter Mischel (2014) has spent a professional lifetime studying the mastery of self-control and has identified skills associated with improved executive control which centre on the principle of ‘cool the now and heat the later’; using Executive Control to cool hot feelings in the present and hot reflexive feelings to warm feelings in the future. For example, with habitual problems such as smoking, to cool the desire for a cigarette here and now and heat up the fear of dying of lung cancer in the future. Executive control skills include ‘if… then… implementation plans’ which seek to make self-control habitual (e.g. if I feel angry, then I’ll count down slowly from one hundred before saying or doing anything), using a future focus (e.g. I’ll count down slowly from one hundred because I want to happily celebrate my twenty-fifth wedding anniversary), using cognitive reappraisals (e.g. my partner gets angry with me because they want to feel securely attached to me and this is ‘an attachment protest’) using distraction (different to avoidance, I know I’m anxious about the party and if I focus on what I’ll do afterwards then I won’t focus on worrying), self-distancing (I’m looking at what bodily feelings a person has when they feel fearful), self-soothing (breathe deeply, imagine the troublesome feeling floating away, using healthy activities to make myself feel pleasure, relaxation, happiness and so on) and self-acceptance (e.g. ‘it’s just one more time of making that same mistake’, rather than self-directed anger ‘what is it with me?’).

Changing behaviour such that fear of rejection does not manifest itself in maladaptive behaviours (hostility, aggression, anger or withdrawal) can improve relationship satisfaction (Bungert et al., 2015). Improving self-esteem and a sense of personal power helps also helps with rejection sensitivity and self-differentiation.

*Cuddy, A. 2016. Presence: Bringing your boldest self to your biggest challenges. London: Orion. (available as an audiobook)

Khaddouma, A, Coop Gordon, K and Bolden, J. 2015. Zen and the art of dating: Mindfulness, differentiation of self and satisfaction in dating relationships. Couple and Family Psychology: Research and Practice 4 (1), pp. 1-13.

*Mischel, W. 2014. The Marshmallow Test: Understanding self-control and how to master it. London: Corgi. (also available as an audiobook)

Norona, J., and Welsh, D. 2016. Rejection sensitivity and relationship satisfaction in dating relationships: The mediating role of differentiation of self. Couple and Family Psychology: Research and Practice, 5(2), pp.124-35..