Personal development or ‘constructive personality change’ is an objective of longer term counselling/psychotherapy. It is mandatory for those seeking to work as a therapist, helpful for those pursuing a ‘serious’ high profile career (e.g. work in media, organisational leader, senior professional etc.), a way of coping with prolonged adverse circumstances (e.g. abuse and or neglect experienced as a child, serious addictions, etc.) and for anyone who wants ‘more’ out of life. Dr Tony Weston regularly works with clients on personal development issues, including therapists/therapists-in-training, clients overcoming adverse circumstances and organisational leaders from a variety of governmental and non-governmental sectors, including owner/leaders.

Rogers wrote extensively about the goals of longer-term psychotherapy and developed the concept of ‘the fully functioning person’. Within his description of the ‘fully functioning person’ Rogers (1959) included concepts of psychological adjustment, acceptance of others, existential living, self-liking, openness to experience and an internalised locus of evaluation (as opposed to an externalised locus of evaluation). This website includes sections on a range of mechanisms that might give rise to particular personality problems and these include:

Attachment Styles, the extent to which a person feels the need to avoid emotional expression and/or feels at risk of losing/missing important others

Rejection Sensitivity, acting in ways in order to defend one-self from being rejected by others (sometimes the strategies to prevent rejection can become self-fulfilling)

Feeling and thoughts that may cause difficulties

Being Oneself daring to be who you really are

Working with the presenting problem(s) and underlying mechanisms can give rise to lasting change.

One way of measuring ‘constructive personality change’ is to consider changes in so-called ‘personality disorders’, an ‘enduring pattern of inner experience and behaviour that deviates markedly from the expectations of the individual’s culture’ (APA 2000) that can be manifest in cognition (perceptions and interpretations of self, others and events), affectivity (emotional responses), interpersonal functioning and impulse control. A preferable phrase is ‘personality process’ to indicate an habitual way of processing information resulting in actions and behaviours that may cause difficulties. Therapy to understand the nature and origin of these ‘habits’ and how they can be changed tends to span a number of sessions spread out over a period of several months.

There are a number of ‘personality disorders’ and some of these are described below briefly, together with some outcome data from this service. The Personality Beliefs Questionnaire (PBQ, Beck & Beck 1991) measures the extent to which people endorse beliefs associated with personality disorders (Beck et al 2007) and has been empirically validated (Beck et al 2001, Butler et al 2002). With Aaron Beck’s permission the PBQ has been adapted for use by UK English-speaking clients at this service.

The Avoidant personality is characterised by ‘a pervasive pattern of social inhibition, feelings of inadequacy and hypersensitivity to negative evaluation’ (APA 2000). The following graph shows outcomes for 75 clients to July 2021 seen at this service. The average number of sessions was 21 sessions (up to 91 sessions). Average client age was around forty years (range 15-60 years), around three-quarters were female, one quarter were single and two-thirds were parents.

The Dependent personality is characterised by ‘a pervasive and excessive need to be taken care of that leads to submissive and clinging behaviour and fears of separation’ (APA 2000). The following graph shows outcomes for 30 clients seen at this service to July 2021 (average 21 sessions, up to 79 sessions): 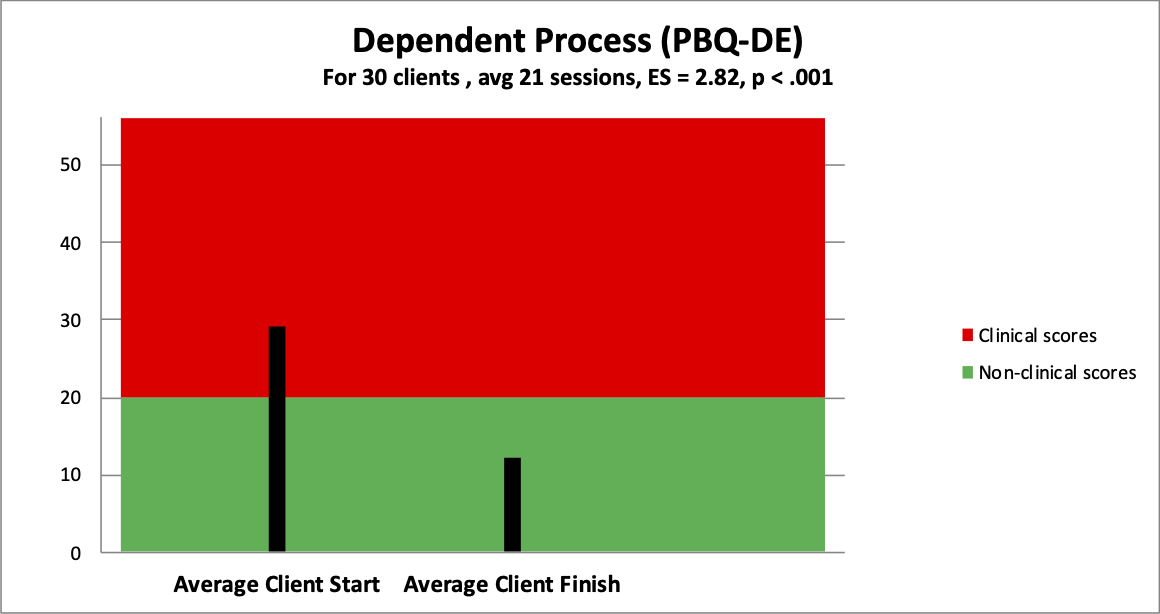 The Passive-Aggressive (negativistic) personality is characterised by ‘a pervasive pattern of negativistic and passive resistance to demands for adequate performance in social and occupational situations’ (APA 2000). Results for 33 clients to July 2021 are shown below (average 21 sessions, up to 76): 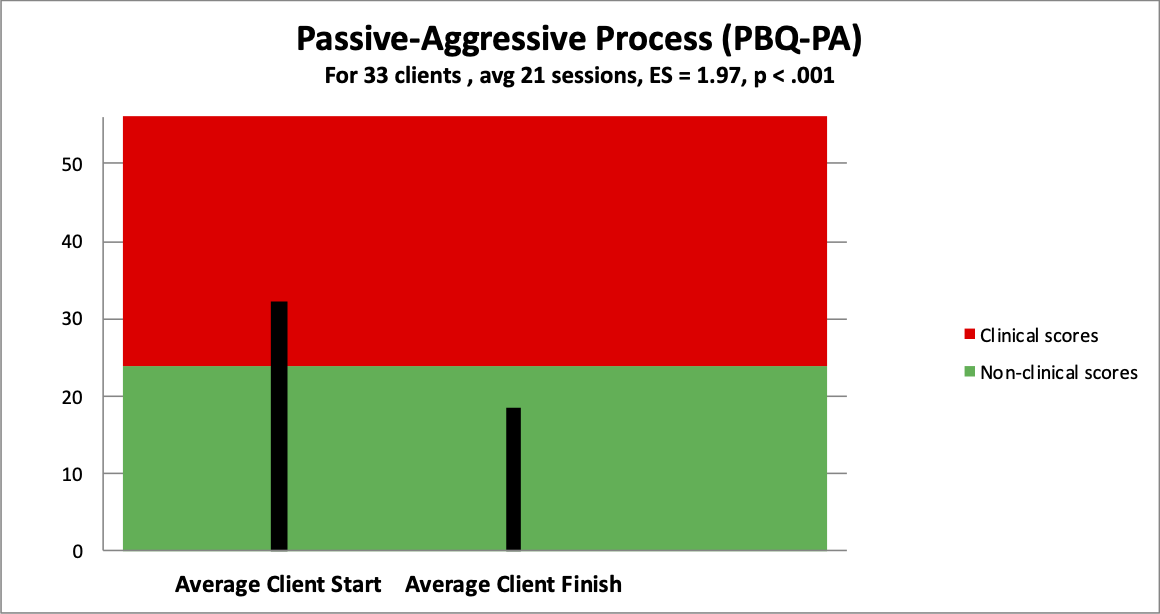 The Obsessive-Compulsive personality is characterised by ‘a preoccupation with orderliness, perfectionism and mental and interpersonal control, at the expense of flexibility, openness and efficiency’ (APA 2000). Following are outcomes for 57 clients seen at this service to July 2021 for an average of 16 sessions (up to 75 sessions):

The Anti-Social personality is characterised by ‘a pervasive pattern of disregard for, and violation of, the rights of others that begins in childhood or early adulthood and continues into adulthood. This pattern has also been referred to as psychopathy, sociopathy or dyssocial personality disorder’ (APA 2000). Following are outcomes for 29 clients seen at this service to July 2021 for an average of 18 sessions (up to 59 sessions):

The Narcissistic personality is characterised by ‘a pervasive pattern of grandiosity (in fantasy or behaviour), need for admiration, and lack of empathy [for other people]’ (APA 2000). Following are outcomes for 14 clients seen at this service to July 2021 for an average of 20 sessions (up to 67 sessions): 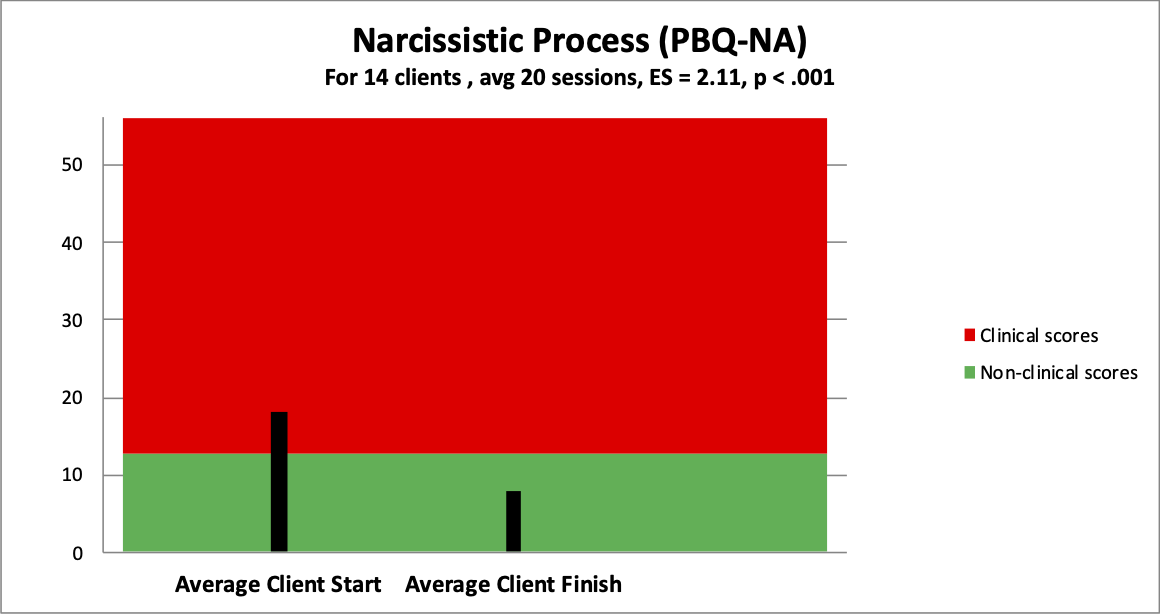 The Histrionic personality is characterised by ‘a pervasive and excessive emotionality and attention-seeking behaviour’ (APA 2000). Outcomes for 21 clients to July 2021 are shown below after an average of 20 sessions:

The Schizoid personality is characterised by ‘a pervasive pattern of detachment from social relationships and a restricted range of expression of emotions in interpersonal settings’ (APA 2000). Outcomes for 28 clients to July 2021 are shown below after an average of 19 sessions (up to 89 sessions): 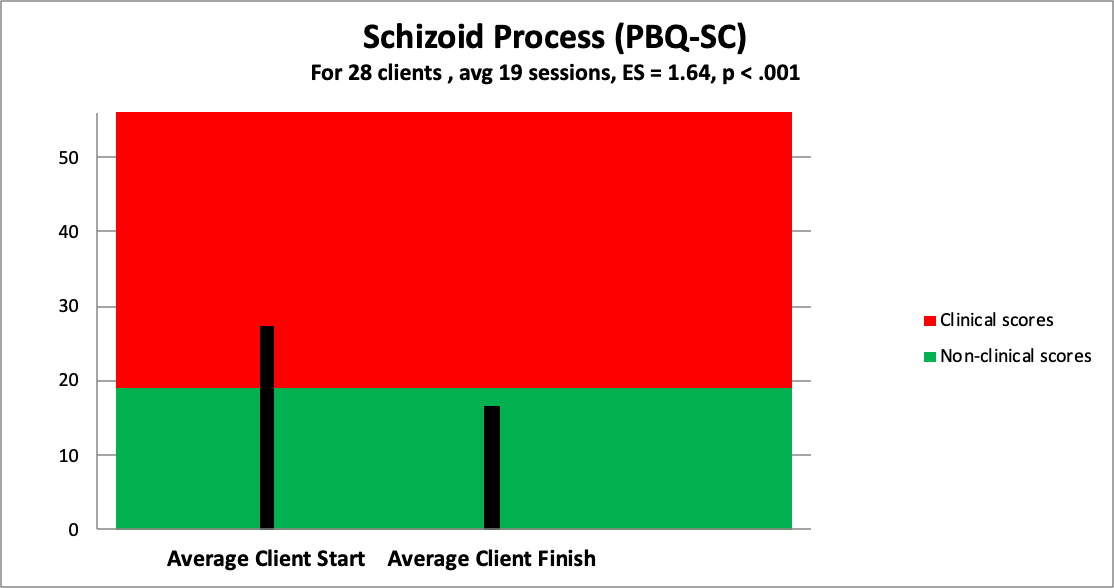 The Paranoid personality is characterised by ‘a pattern of pervasive distrust and suspiciousness of others such that their motives are interpreted as malevolent’ (APA 2000). Outcomes for 46 clients to July 2021 are shown after an average of 18 sessions (up to 78 sessions):

The Borderline personality is characterised by ‘a pervasive pattern of instability of interpersonal relationships, self image and affects, and marked impulsivity’ (APA 2000). Outcomes for 34 clients to July 2021 are shown below after an average of 27 sessions (up to 78 sessions):

These kinds of personality processes usually begin by early adulthood and are often what seem like ‘adaptive’ ways of coping with adverse situations that continue into adulthood, when the coping mechanisms are no longer appropriate for the situation and can create problems for the person and others around them. These effects can be particularly pernicious when a person finds themselves ‘stuck’ in situations where they are rewarded for continuing to act out these out-dated coping mechanisms e.g. the histrionic actor, the obsessive-compulsive manager, the dependent partner, etc. Changing the way one habitually behaves (constructive personality change), can be challenging, time consuming and ultimately rewarding, to ‘master oneself’.

Rogers, C R (1959) ‘A theory of therapy, personality and interpersonal relationships as developed in the client-centred framework’. In Koch, S (Ed). Psychology: A study of science, volume 3, Formulations of the person and the social context. New York: McGraw-Hill 184-256.

Rowan, J (1993) ‘The transpersonal in psychotherapy and counselling’. Routledge: London.