Clients attend counselling for many different reasons. Sometimes it might be about difficulties at work or at home; relationship difficulties, perhaps with a partner, parent, child or sibling, or maybe a sense that there ‘ought to be more to life than this’. Difficulties at home may affect work and problems at work may be affecting home life; one part of life impacting another. Because people have counselling for many different reasons it can be difficult to assess the effectiveness of the counselling for all of those different reasons. In the UK a group of researchers developed the CORE system (Clinical Outcomes Routine Evaluation) to measure the distress the difficulties were causing the individual client; measuring the change in distress indicates the effectiveness of the counselling for the particular reasons the client chose to attend. If you are reading this, perhaps it is because you are (or someone you know is) feeling distressed about some particular problem(s) that are causing difficulties.

Research shows that the kinds of distress that can be addressed by effective counselling include:

– reduced wellbeing; lack of optimism, feeling like crying, feeling overwhelmed
– problems with feeling down (depressed), feeling fearful (anxious), feeling traumatised by events, physical difficulties with sleeping and pain
– problems getting things done and or interacting with other people
– feeling like harming self or harming others

Dr Tony Weston’s BACP award winning research showed how clients improved through counselling in terms of their general distress caused by a number of problems such as abuse, addiction, anger, bereavement and relationship difficulties. Dr Weston’s private practice is located close to Cambridge, 11.5 miles south of Addenbrookes NHS Hospital, just off the A1307 (and on the 13 bus route) in the South Cambridgeshire village of Horseheath. Dr Weston’s counselling psychotherapy treatment is easily accessible from Cambridgeshire, Suffolk, Hertfordshire and Essex. Distances from local centres are Bishops Stortford 20 miles, Braintree 20 miles, Sudbury 20 miles and Bury St Edmunds 21 miles.

Dr Weston enjoys working with individuals, couples and family groups (e.g. parent and child). Contact him now on 01223-894896 (phone is answered by a receptionist 24/7) or email him at tony.weston5@btinternet.com to make an initial appointment.

The rest of this page gives you some more information about problems clients have worked with Dr Tony Weston on through counselling and the kinds of changes in distress they have experienced, using validated scientific tests for signs and symptoms of distress. Dr Weston was pleased to accept the British Association for Counselling and Psychotherapy (BACP) 2011 award for Outstanding Research Project from Ruby Wax. This was for his research on effective therapy for depression, anxiety and general distress, including with Dr Weston’s own clients and 27 fellow therapists.

NOTE: The information provided on this website is for general information only and not intended as a substitute for diagnosis or treatment; if you are concerned about your health please contact an appropriate practitioner.

Outcomes for clients presenting at this counselling service with general distress are shown below. To April 2021 there were 335 clients who had started with some level of clinical distress and who had a subsequent measurement of their distress, measured using the Clinical Outcomes Routine Evaluation Outcome Measure (CORE-OM). Client average age was around 40 years (ranging from 12 to 79 years), just over half were female, around a third were single and two thirds were parents. The average number of sessions was six, (range 2-37 sessions). Client average scores are illustrated in the graph below: 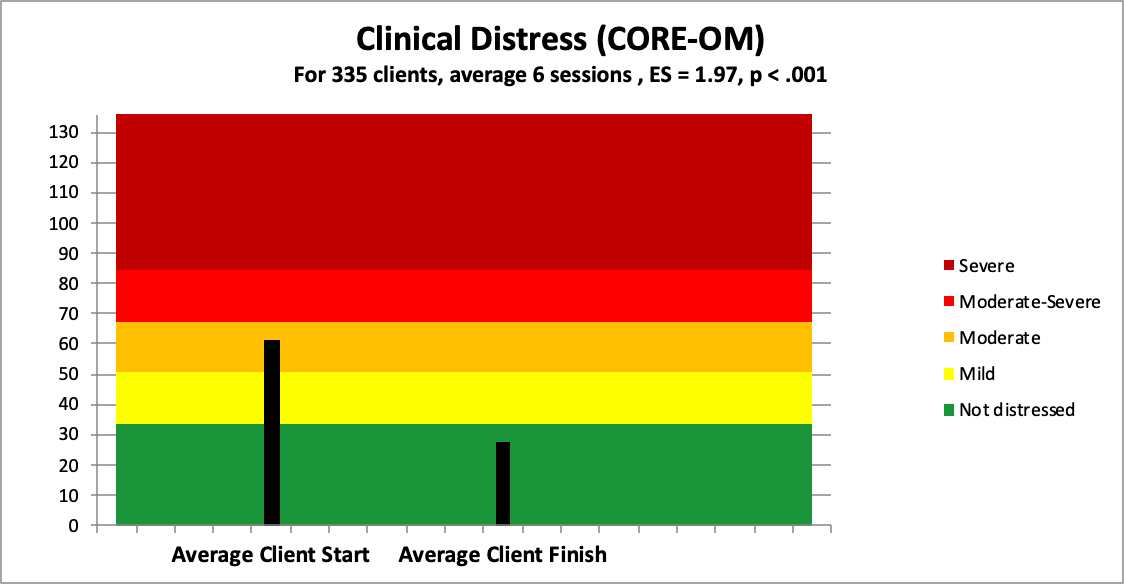 Using the methodology described by Elliott, et al. (2013) these average outcomes compare well with the published literature for distress outcomes in clinical trials and practice-based studies.

The CORE-OM subscales show the kinds of changes clients experience as a consequence of their counselling. One of these is changes in ‘wellbeing’ that clients experience. For statistical reasons what is actually measured is ‘absence of wellbeing’. Absence of well-being covers dimensions such as ‘not feeling ok about myself’, ‘feeling like crying’, ‘not feeling optimistic about the future’ and ‘feeling overwhelmed by problems’. High scores indicate ‘lower wellbeing’ and low scores indicate ‘higher wellbeing’, i.e. feeling well or ‘feeling good’. To April 2021, for 293 clients scoring seven or more out of a maximum sixteen for ‘absence of wellbeing’ average changes after seven sessions (range 2 to 37 sessions) were as follows: 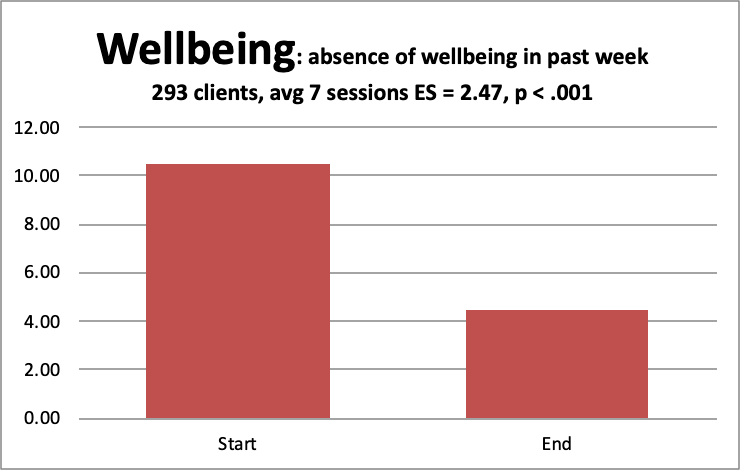 Changes in fearfulness or anxiety are measured by CORE-OM by asking clients about ‘feeling tense, anxious or nervous’, ‘tension and anxiety have prevented me doing important things’, ‘feeling panic or terror’ and ‘my problems have been impossible to put to one side’. To April 2021 for 313 clients scoring at least five out of a maximum sixteen for symptoms of anxiety at the start of counselling, average changes in anxiety are shown below, after an average of six sessions: 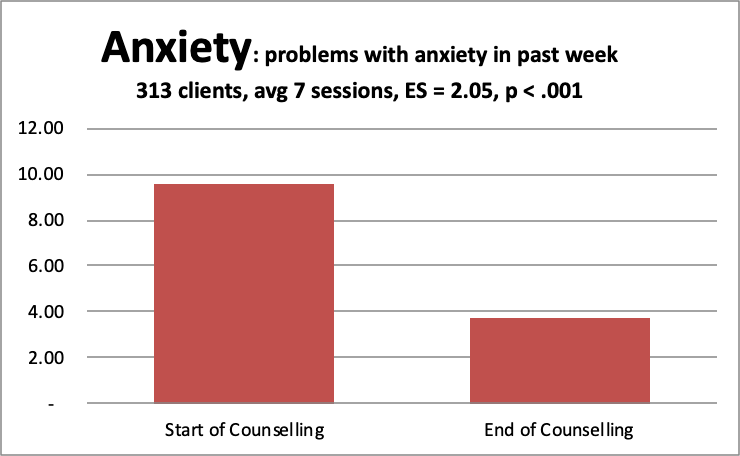 Symptoms of feeling down or depressed are measured by asking clients about ‘feeling totally lacking in energy and enthusiasm’, ‘feeling despairing or hopeless’, ‘feeling unhappy’ and ‘I thought I am to blame for my problems and difficulties’. For 276 clients to April 2021, scoring eight or more out of a maximum sixteen on the depression subscale, average changes in depression are shown below, after an average of seven sessions: 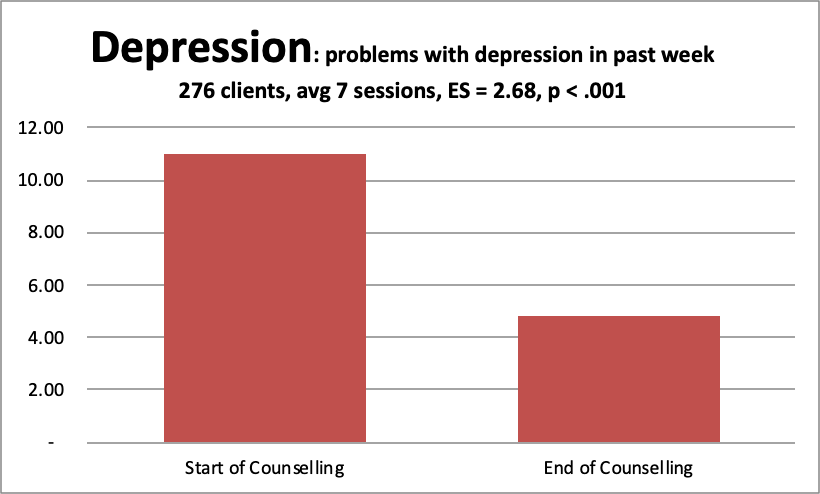 Distress can cause difficulties with sleeping and may make physical problems feel worse. Physical problems are measured by asking clients about being ‘troubled by aches, pains or other physical problems’ and ‘difficulty getting to sleep or staying asleep’. For 248 clients to March 2021 who scored three or more at the start of counselling out of a maximum eight for ‘physical problems’ average changes are shown below after an average of seven sessions: 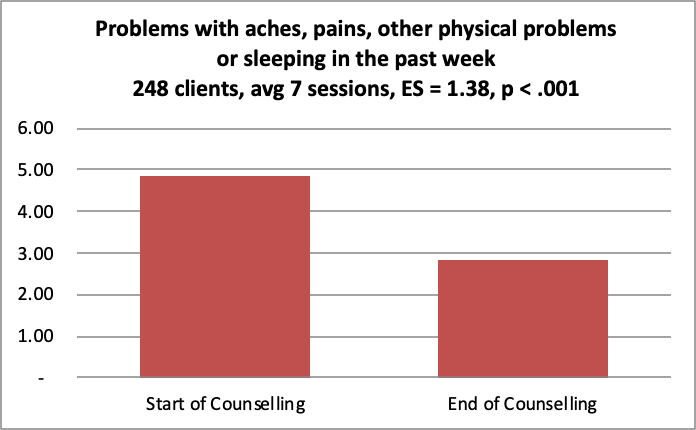 Difficulties with traumatic memories are considered by asking clients about ‘being disturbed by unwanted thoughts and feelings’ and ‘unwanted images or memories have been distressing me’. To April 2021 for 194 clients scoring four or more out of a maximum eight for trauma at the start of counselling, average changes after seven sessions are shown below: 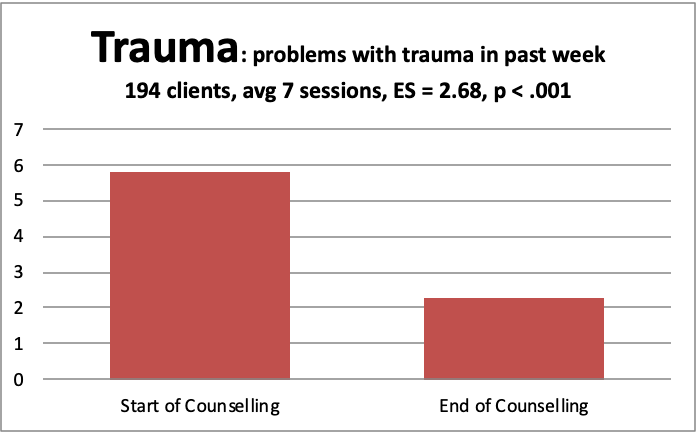 Difficulties with getting things done

Clients having difficulties in getting things done (difficulties with general functioning) endorse questions about not ‘feeling able to cope when things go wrong’, not ‘feeling happy with the things I have done’, not ‘feeling able to do most things I needed to’ and or not ‘achieved the things I wanted to’. To April 2021, there were 235 clients who scored seven or more out of a maximum sixteen at the start of counselling for ‘difficulties getting things done’ had the following average outcomes after an average of seven sessions: 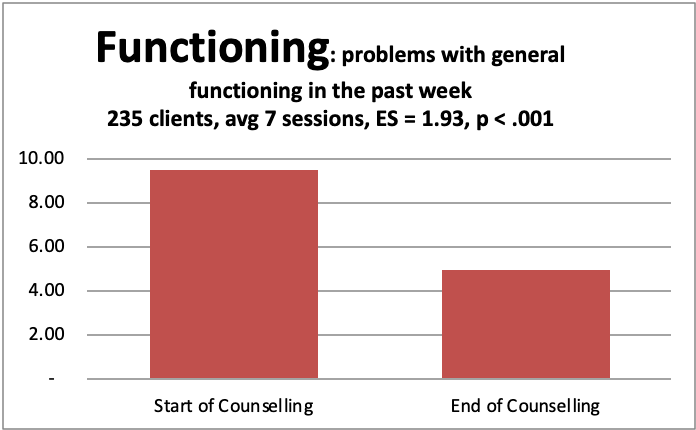 Experiencing difficulties can cause problems in close relationships, such as ‘I felt terribly alone and isolated’, ‘I have thought I have no friends’, not feeling ‘I have someone to turn to for support when needed’, and or not feeling ‘warmth or affection for someone’. To April 2021 average outcomes for 121 clients scoring at least eight out of a maximum sixteen for difficulties in close relationships at the start of counselling had the following average outcomes after an average of seven sessions: 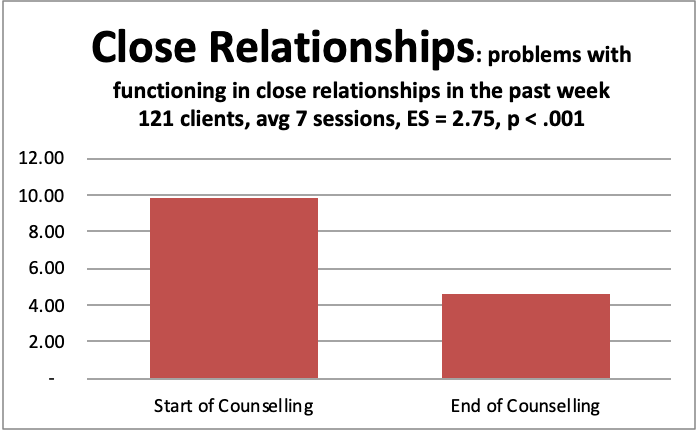 Risk of harm to self

Sometimes distress can be so great that some clients may consider harming themselves and this ‘risk to self’ is measured in a number of ways. These include over the last week I have ‘had thoughts of harming myself’, ‘making plans to end my life’, ‘thinking it would be better if I were dead’ and or ‘over the last week I have hurt myself physically or taken dangerous risks with my health’. For 201 clients who have endorsed at least one of these ‘risks to self’ at the start of counselling to April 2021, average outcomes are shown in the following graph after an average of seven sessions:

Risk of harm to others

Whilst feeling distressed some clients may assess themselves as representing a risk to others in terms of ‘over the last week I have been physically violent to others’ and or ‘over the last week I have threatened or intimidated another person’. For 113 clients to April 2021 who endorsed at least one of these ‘risks to others’ at the start of counselling, average outcomes are shown in the following graph, after an average of six sessions: 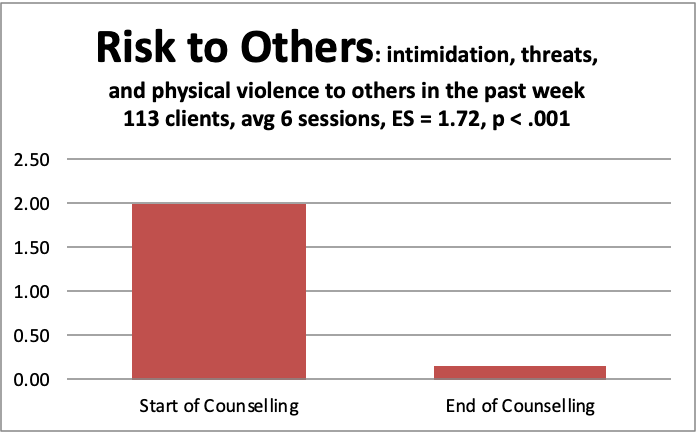 Clinical trials typically exclude clients who have more than one presenting problem e.g. a clinical trial might only include clients with a clinical level of distress. This ‘naturalistic’ practice-based research included clients who are usually excluded from clinical trials, for example around half of all clients reported some level of harm to self, at least seven out of ten clients also suffered with anxiety, seven out of ten clients reported at least one symptom of panic attacks, at least two-thirds of clients had a so-called ‘personality disorder’, three-quarters reported some level of trauma, one in five reported problems to do with eating, one in five reported problems with addiction (drink, drugs, gambling, porn, etc.), in addition to their distress.

This naturalistic research showed on average a large improvement with a wide range of different presenting problems, even if there were other co-occuring symptoms.

Please note past performance is no guide to the future and there are no guarantees about outcome in therapy.

You can contact Dr Tony Weston on 01223-894896 (phone is answered by a receptionist 24/7) or email him at tony.weston5@btinternet.com to make an initial appointment.